1. Dogs can impale themselves on a stick.
This is probably the most common way that sticks can cause an injury, especially if the stick is thrown end over end. If the stick gets stuck in the ground in an upright or forward facing position, it can become a spear for a dog that’s running full speed towards it. A dog can pounce or fall on the stick or try to grab it while running and possibly impale the roof of their mouth or throat. Another risk is when a dog retrieves the stick and carries it from the end rather than the middle. They can easily impale themselves while running back to you if the end of the stick hits something like a tree or the ground, especially if they’re jumping over obstacles.

2. Chewed or swallowed pieces of wood can cause splinters and obstructions.
Smaller pieces of wood or splinters can become lodged in a dog’s gumline or other areas of the mouth. If swallowed, those pieces can also cause potential problems such as obstructions in the respiratory or digestive system. It can be a challenge for vets to find small splinters or pieces of wood after removing a larger piece because those small, rogue splinters often don’t show up on X-rays and could cause an infection requiring a second surgery later.

3. Dogs can shear off pieces of a stick that can become wedged in their mouths.

This is probably not as common, but it actually happened to Haley once. She likes to break sticks into pieces with her back molars. Those premolars are so efficient at shearing, she cut right through both sides of the stick and the piece left in her mouth became wedged between her top molars. In Haley’s case, I was able to reach in and remove the stick even though she was very frantic but I was lucky that she didn’t accidentally bite me in the process. Luckily, she was fine afterwards but sometimes a wedged piece of stick can cause injuries to the mouth.

4. Dogs can be injured by a falling stick.
Some dogs run so fast that they can get to the fall zone well before the sticks lands. A falling stick can cause head and eye injuries as well as harm to other parts of the body. Even if you keep your dog in a stay position and wait to release her, the stick could still be lodged upright in the ground when your dog finds it.

5. Multiple dogs can injure each other while playing with sticks. 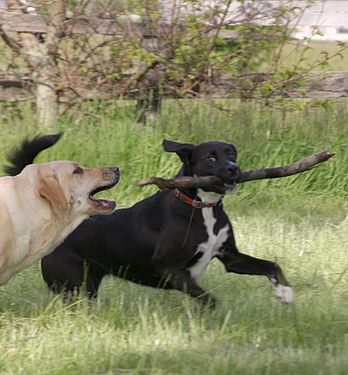 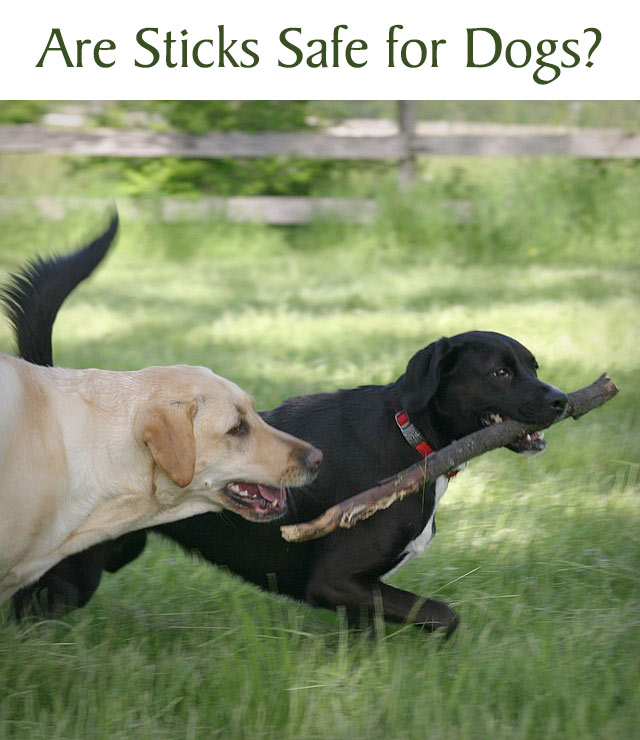