Lucky for you, training your dog to sit is not only the most useful command but it’s the easiest one to teach!  Most dogs learn this command quickly and you’ll soon be able to use his new skill in a variety of situations to easily manage your dog.

First, let’s see how simple it is.

Stand or kneel facing your dog and hold a training treat near his nose to get his attention. Move the treat towards his nose while raising it slightly above nose level. As he looks up to follow the treat with his nose, his backend will automatically lower into a sitting position. Give the verbal command “Sit” as he begins lowering his rear and reward him with the treat when his rear hits the ground. That’s it!

If you need some extra help, here are a few tips: Remember, dogs follow their noses and you are directing his movement with the treat.  Keep the treat close to his nose without letting him have it until he sits. Never physically force the dog into a sitting position. 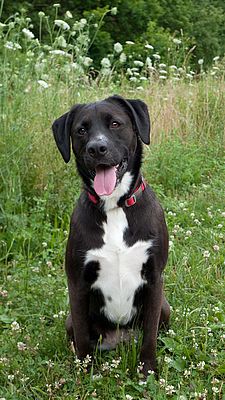 Practice several times each day in short sessions, giving him lots of praise when he’s successful.  As your dog catches on, start giving the command with the treat further away from his nose.  Eventually your dog will understand the verbal command without using treats, but occasionally reward him for sitting because he’s such a good boy!

Now you can start working the sit command into your dog’s daily routine.  Having your dog sit before getting food, treats or toys teaches him good manners, patience and respect.  The sit command is also an effective way to resolve common behavioral issues such as rushing through open doors or jumping on guests.  Teaching your dog an alternate behavior such as Sit lets him know what you expect from him in those situations.  Rather than repeatedly saying “No!” to your dog, tell him what you would like him to do.  Sit!

Isn’t it amazing the easiest command to teach your dog is so useful?

4 Comments on “The Most Useful Command to Teach Your Dog”